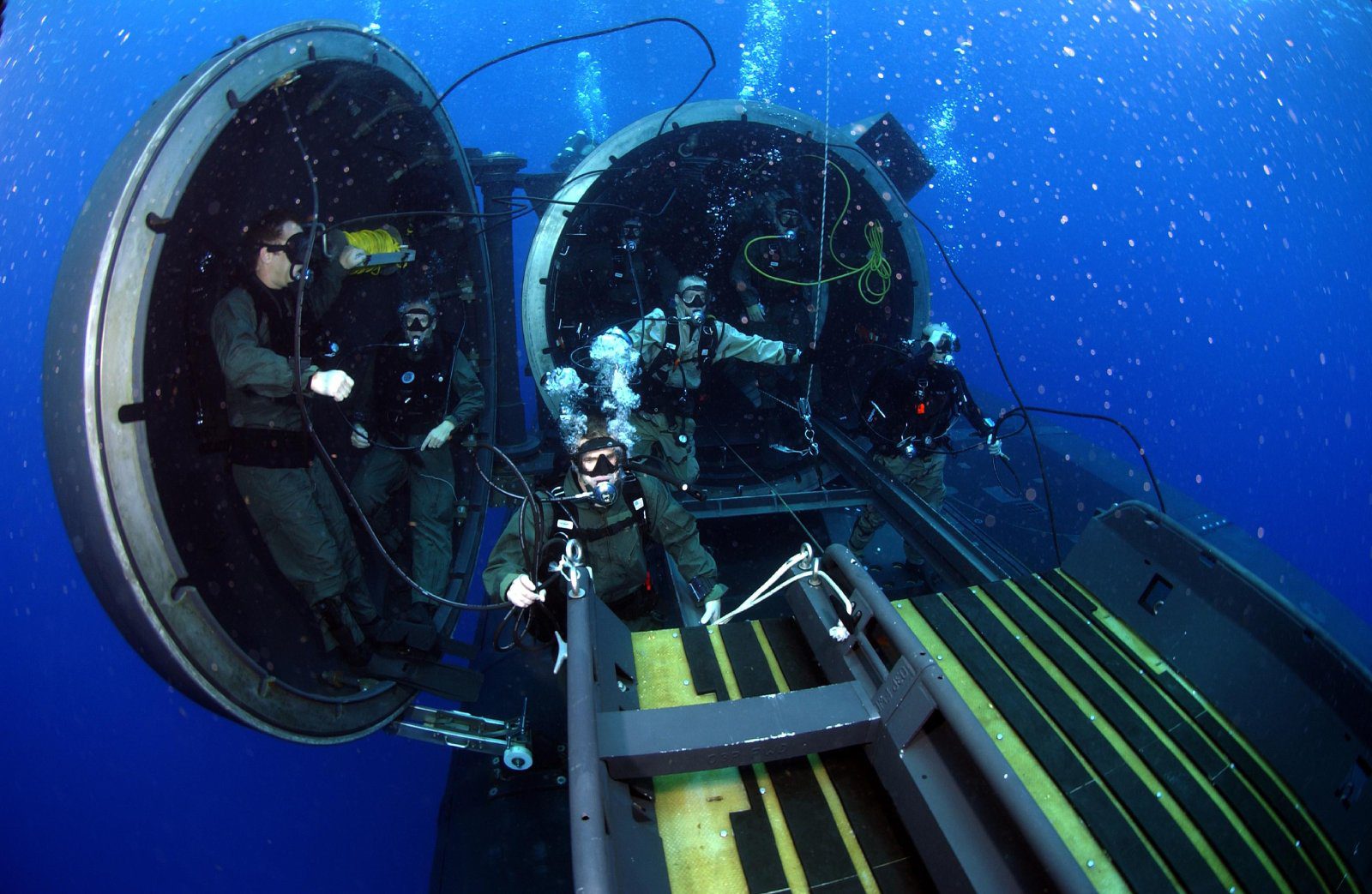 The reunion is history. The final count was 105 divers/diver support personnel who registered and we entertained about 135 to 150 total which included spouses and significant others. Seemed like everyone liked the NDA coin. The auction took in approximately $6,300. It appeared that everyone had a great time, ate their fill, drank their fill and are ready to do it again.

We had 102 attending the Monday evening reception and they easily and quickly plowed through all the heavy hors d'oeuvres in less than an hour and a half. There was a glitch in the kitchen and they miscounted the food we were supposed to be served. So, after a short intermission, the food began coming out again.

One hundred and two (102) enjoyed the sumptuous buffet, drinks and Larry "Doc" Stokes auction. We were also honored to have Mark Drilling, a terrific auctioneer from the Stokes Auction Group in Encinitis, CA. Between Larry and Mark, we had a great auction and brought in roughly $6,300.

Luckily the NDA has it's own professional photographers in Don "Dino" Vester and his lovely wife Michiko. They spent the entire Wednesday evening at the banquet shooting attendees in various poses. In addition, they shot several pictures around the hospitality suite and pool area and still found time to tour San Diego with other reunion attendees and took pictures of the Vietnam Riverine Force Memorial at the Amphib Base on Coronado. I have posted all the pictures that Dino and Michiko took. I hope you enjoy them

We held our bi-annual Wednesday morning meeting and discussed, among other items, where we wanted to have our 2012 Reunion. The cities selected for me to look at are: Bremerton, WA; Galveston, TX; Las Vegas/Laughlin, NV; Branson, MO; and Charleston, SC. I have enlisted the aid of two professional planners to reaserach all the sites for reasonable room rates, availability of a comped hospitality suite, ease to get to, parking, etc. They presented me with a brakdown last week and I am reviewing now. We should have a winner in three or four weeks.

Charlie Mosier audited the treasurer's books and bank statements and determined the finances fro the NDA are in good order.

Leonard Greenstone, WWII Salvage Diver, brought several large poster sized pictures of diving on the disabled and sunk ships in Pearl Harbor in 1941 and 1942 as well as a large schematic of the French passenger liner Normandie.

I would like to thank Keith Michael, Shawn Watson, Patrick Higgins and the members of Hill 180 Memorial VFW Post 10216 for taking their personal time to help us getting money to the coin makers and assuring we received what we ordered. By paying cash, we saved over $100. VFW Post 10216 is located in Songtan Si, Pyongtaek, South Korea, just outside the main gate of Osan Air Base in the basement level of the Pacific Hotel.

That about wraps it up for this time.

Take a look at every 2010 NDA Reunion picture.

Well, the count-down has begun. Looks like we are going to have a great turnout.

SPECIAL FOR BIKERS -- Jim Phalin, John Ennis and Rick Bedard have planned a Diver's Motorcycle Ride to coincide with the Reunion and WDC on Friday morning the 7th of May. I would love to have as many former divers and friends join us as possible. I have a lot of the local active guys contacted and will have it put out at the WDC but l'm lacking the emails of many of the former DVs. They can use me for sign up. I know it would be too short notice for most of the out-of-towners but I'm sure there are local divers that have bikes that may be interested. Rick Bedard has developed an outstanding route planned for the ride.  He will be our leader because he has lead groups many times before. It will take about six hours total but anyone can break off anytime they want.

ROOMS -- I still have about five rooms that I have saved on my credit card at the reduced rate of $98 a night, If anyone still needs a room, please let me know ASAP. I have to let these go by Wednesday of next week.

THINGS TO DO -- Chuck & Sparkles Gross found discounts for site seeing trips around San Diego at the Military PX. You can go to their web site ahead of time to choose your site seeing trip. Plan ahead as you must pick up with your military ID card. Chuck said they really enjoyed the 2.5 hour Trolley tour and the Harbor tour.

GOLFING -- Joe Medina is checking out the local golf courses. So, if you have clubs, bring 'em.

RV PARKS -- There are several RV parks and I've listed below:

See you all in San Diego in a little over a week.

The 2010 Navy Divers Association (NDA) Reunion will be held Sunday through Wednesday, May 2-6, 2010, at the Handlery Hotel & Resort www.handlery.com in San Diego, CA.

I've checked the menus and prices for the two events we have every reunion.  This reunion will be no different.  The information below is preliminary and approximate just to give you an idea of what we will be having this year and what the costs will be.  Pretty close, but still approximate.

The March newsletter is out and lists many that have already committed to coming as well as additional information.

Room Rates:   $98 per night plus 12.5% tax.  This rate will be honored three days before and three days after.  If you are planning on staying a week, ask for a weekly rate.  You may save a few bucks.

Reunion Charges:  No registration fees.  Only pay for the events you attend:

These menus may be subject to slight changes as I am working from their 2008 menus and these were the latest they had six months ago.  Things may change a little and I will pass these changes along as they come up.

We have our annual auction to raise funds for the newsletter mailings and whatever charity we pick to donate to, etc.  Larry â€œDocâ€ Stokes, retired professional auctioneer, will be our esteemed auctioneer for the evening.  We generally hold our auction after our dinner, but this is subject to change if Larry thinks we can do it at a better time.

You can start getting into "NDA Reunion mood" by looking at some of the pictures of the HS where I am certain you will spend considerable time hoisting a few brews with your shipmates. Like, if you want to stay out of the San Diego sun, you can sit in the suite around the bar area or over in the corner. Or, if you'd like to pull up a few tables and sit around the pool right outside the suite, you can. Or, you can just swim in the large pool.

I recommend you all start making your reservation at the Handlery now.  You can call Group Reservations at 1-619-298-0511 or toll free at 1-800-676-6567 between the hours of 6:00 A.M. and 12:00 Midnight Pacific Standard Time (PST) and reference the promo code NAVY and the Group: NAVY DIVERS REUNION.   You will need to give them your credit card number to guarantee your reservations. The Handlery accepts Visa, MasterCard, American Express, Discover, and most other major credit cards.

That's it for now.  I'll keep you all posted.

Attendees may begin checking in on Sunday, May 2, 2010, at the Handlery Hotel & Resort